{one}
It's a Tuesday morning that feels like a Monday morning. Blah...
{two}
I had a lot of fun over the weekend with some of the people I love the most!
{three}
I live 20 minutes away from the beach, but I almost never actually go to beach.
Sad, isn't it?
{four}
I did go to the beach this weekend!
It was a lot of fun. :) 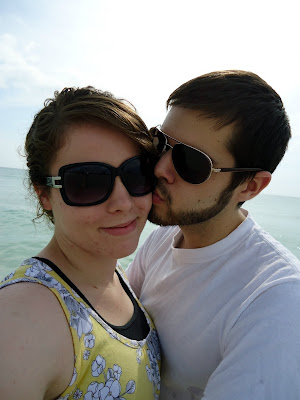 {five}
It was a great weekend, but not the most productive.
I have a lot to do this week!
{six}
The fireworks yesterday were so pretty, but so loud!
The Sweetheart said that next year, I'll have to bring some earplugs...
{seven}
I looove kiwis. They are SO yummy.
{eight}
I am an extremely lucky girl.
Look who's going to be mine in 95 days... 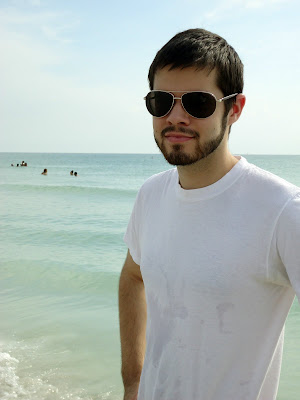 Awww, glad you had such a great weekend! At the beach, no less! I hope your 4 day week goes by fast ;)

Aw, the first pic is so sweet! So excited for you! My friend Stephanie grew up by the beach and hardly ever went too!

you guys are cute :)

Ohhhh I love this post! You two are the cutest and I love you both tons. Cant wait for the big day!!!

P.s our sweeties almost have the same facial hair hahaha =)

Yay for making it to the beach! Staring at the ocean always calms me down when I'm stressed, so I guess I was luck to grow up in a coastal town right on the ocean.

awwww yay! it's getting closer! you two are so cute together.